A downloadable game for Windows, macOS, Linux, and Android

Tres-Bashers (like "trespassers") is a 2D monster-bashing adventure featuring a big interconnected map full of cryptids, secrets, and more! Find 40 different monster types, and whack 'em with your baseball bat!

In order to download this game you must purchase it at or above the minimum price of $9.99 USD. You will get access to the following files:

On Android, controls disappear on launch. No way to get past intro screen. Can get around by connecting a controller and then disconnecting it. Any way around this without a controller?

very weird! they are supposed to be enabled by default as long as no gamepad is connected on boot. I'll try and replicate the issue and see if there's something I can fix in the next patch. thanks for the feedback!

Easily one of the best games I've played this year! Just finished a Pacifist + Mirror First challenge run after my 100% playthrough yesterday (almost got Speedy Boy too, off by juuust a few minutes) and the routing was just bonkers, not being able to break any of the kill blocks past the first completely turned the game on its head and showed just how open-ended and well thought out the level design is. Sequence bashing!

The wording "less than 10 kills" had me sweating bullets when the kill count went up to 10 at the final boss, I'd recommend changing it to "just 10 kills" to be more clear and also make the run objective obvious (4 regulars for the first kill block and then the 6 bosses only).

I'd love to see a sequel or DLC with Jerry, this game seriously rules and the only problem I have with it is I'm going to still want to play more of it after getting all the achievements!

To say it's one of the game ever made won't be exaggerating.
It's just so much fun to play.

Is there an estimated date for the 64-bit Mac app? Game looks sick, but I don't have a system that supports it.

Hi! Currently I don't have access to a 64-bit Mac to compile on (and don't know when I will...) but once I do I will add support for it. Thanks for your comment!

No worries, your game looks really cool! Considering I'm asking from an M1 mac, let me know if there's anyway I could help. Only if that's something you're down for. And thanks for the reply!

I just bought the game hoping to play it later, because I only have 64-bit mac myself.

BUT, when running from within the itch.io app, game works perfectly. I played for about 10 minutes to test things out and everything seems fine.

i've been playing for two days, i just defeated Sasquatch but i can't get to that hidden room and get the fuckin axe to complete 100% and get to hell well.

Great game, dude. The difficulty is in the right measure

Played this over two nights of insomnia. I really liked it! I liked the school setting, distorting a familiar location, especially one where you're not supposed to be there at that hour. I don't know if I'd call it spooky, but it definitely feels... halloween-y if that makes sense? The idea of being a kid out at night, pointing a flashlight at shadowy figures just feels like a very halloween thing.

The weapons all feel very different from each other and it takes a while to adjust to one and for most of the game I didn't have a definite favorite, going back and forth between them based on what cryptids I was fighting.

And the cryptids are great! I love the light mechanic as it makes you guess as to what cryptid you're going to see next and it does keep you on edge a bit. And each cryptid feels very unique and needed different strategies to take them out effectively. I also love how open the game is, I'm pretty sure I cheesed the backflip to get to areas that would have been much easier to get to a little later in the game and the monsters were much harder than what I was encountering.

Finished the game with 416 cryptids defeated and all pages retrieved. Not sure where the last 4 are, but I think they might be Sneaks that I missed somewhere. The only other thing I didn't get was the thing at the top of the clocktower. I know one character says that at some point you can break spikes, but to my knowledge none of the stuff I picked up allowed me to break them.

My only gripe was the controls. Especially in the beginning it was difficult for me to control the character and even later in the game it wasn't clear to me when my character would face the other direction or just walk backwards. I think I got the hang of it in the end but I still had moments were I thought my character would turn but didn't.

Overall, great game! Had a lot of fun with it.

Bought the game, and than blazed through it in it's entirety over the course of a day. It's style just oozes charm in a way that's both appealing and spooky. Heck, for being a game styled after the NES and not trying to be overtly scary, the game really spooked me a few times!  (I blame the Frogmen and the Monsters in the Blood Basement.)

I was able to get all of the weapons, jackets, 45/50 Health and 37 of the Pages. It really captivated me, not only in its style but in the controls! It's been a while since i've played a game with such snappy controls that just let you blaze through corridors and bashing things!

My only two complaints are: Once I got the item that allows you to see Pages on the map it didn't work. So i'm still missing a few of the pages, and I don't know if I have the wherewithal to comb every area without that item functioning.

My other issue is with the Windyghast. While i'm at least happy you didn't use the actual term of Wxndigo for it, it's still pretty clear what the inspiration was and it rubbed me the wrong way seeing a piece of Native American culture apropriated again. Heck, the concept of the Wxndigo that people conflate with pop-culture, of the giant deer monstrosity, ain't even accurate! So just changing it's name to something along the lines of Capra Demon would probably work just as well without even changing the monster.

Those two issues aside, i'm glad I bought the game. Despite the two small issues (One being a bug, and one probably more tied with lack of info/misinformation as opposed to genuine malicious intent.) everything else about it filled me with the sort of Halloween Spirit that not a lot of games have! Sure we have Pure Horror Games but, games like Tres-Bashers are special. In that they're not explicitly Horror, or meant to scare you, but embody all the strange, odd, spooky, and all around fantastical elements of Cryptozoology and Halloween that we need more of.

The item allowing you to see the pages is bugged out. I'll be rolling out a patch sometime soon to correct this, but if you want to see the remaining pages on the map in the current version, they'll show up on there when you get the monster radar from the shop in the mothership. And if you ever script, never trust your instincts when you copy and paste!

The issue with the Wxndigo is something I went back and forth a lot on during development. The idea to make the monster based on that came from a point in development when I was experiencing creative block and combing through Wikipedia and Google images for inspiration. Upon designing the monster and showing it off to a few people, I received a little bit of caution from those who knew more about its significance I did. But I was attached to the design I came up with, and admittedly frustrated with the idea that naming it anything else might break cohesion with the cryptid theme. I tried to compromise by altering the name. It was Windymoose at one point, but I went back to Windygoon which in retrospect didn't really do enough to remove the connection. Anyway, I do want to correct this, so I'll be renaming the monster to Deimoose in the next update. Apologies for any harm done!

I really appreciate the kind words about the game! Tres-Bashers has effectively been my 2021 project. I'm happy to see so many people really vibe with the game! 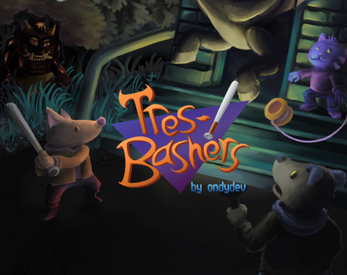